Following Huddersfield Town’s relegation, one of the fixtures they, and their Leeds United counterparts, look out for is the first Yorkshire derby of the season. On Saturday we saw the re-ignition of these typically feisty affairs at the John Smith’s Stadium.

A chaotic defeat to Derby County in the play-offs last season left Leeds stuck in the EFL Championship for another season. However, they’ve retained Marcelo Bielsa’s services and have shown no signs of a hangover, creating a five-point gap between them and Fulham before the day’s play. The Whites come into this off a dominant 4:0 victory over ex-player Jonathan Woodgate’s struggling Middlesbrough side.

The highly-rated Cowley brothers’ appointment in early September has improved the Terriers’ fortunes after the disastrous start they experienced under previous boss Jan Siewert.

In this tactical analysis, we shall dissect the tactics of the respective teams and managers game-plan in this EFL Championship match between Huddersfield Town and Leeds United. 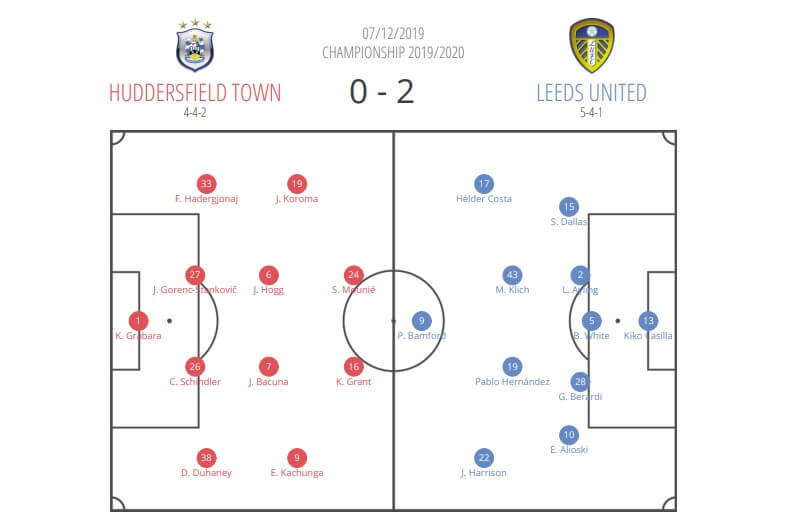 Danny Cowley made a total of three changes to his team. Steve Mounié came in for the injured Frazier Campbell, Josh Koroma took Lewis O’Brien’s place to go at left wing. And youth player Demeaco Duhaney got ahead of the infinitely more experienced Terence Kongolo, playing at right-back. Top scorer for the home side Karlan Grant would be looking to add to his tally of 11. Cowley’s options off the bench though were very limited with a number of youth players making the bench.

Bielsa has had to cope with a minor defensive crisis.

If you want to read the full tactical breakdown of this game, head over to totalfootballanalysis.com or click HERE

If you love tactical analysis, then you’ll love the digital magazines from totalfootballanalysis.com – a guaranteed 100+ pages of pure tactical analysis covering topics from the Premier League, Serie A, La Liga, Bundesliga and many, many more. Buy your copy of the December issue for just ₤4.99 here